In august we spent a week with Bureau Buitengewone Zaken, to experience their hidden design method. During the week we were challenged to design and develop interventions aimed at testing our questions, engaging with participants and collecting data to further feed our research.

The first day was spent mapping our objectives as a starting point for the first steps in designing some kind of interaction with participants. 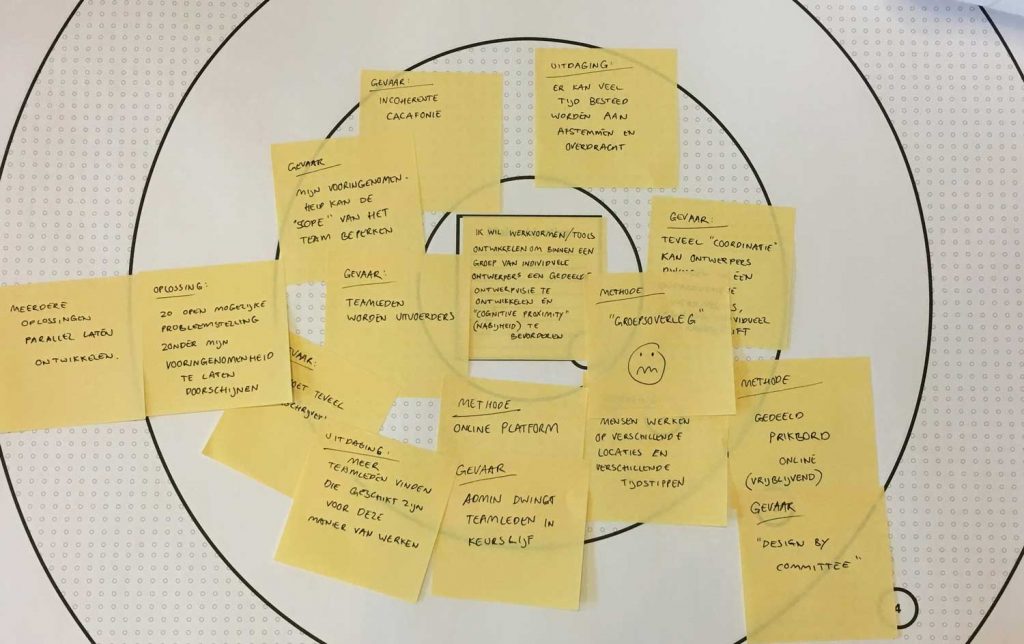 I started out with the main research question that formed the center of my poster essay, and developed a sub-question that would be the basis for my work during the next days.

At first I was struggling to come up with an idea that could be executed in the following days. There was no real possibility to do a session with my filmmaking peers. But following a conversation with one of the coaches I realized I could use my activities as a rugby youth trainer to experiment with the hidden design method.

While a lot of rugby coaching is done through ‘drilling’ the intended behavior, the best theoretical outcome is that the players play exactly as expected of them. In practice this is never the case of course, especially with children. During this workshop I wanted to test what role I can play in inviting the players to be creative in their solutions, developing new (to them and maybe to me) types of play. The thought is that this may lead to developing a playing style from within the group, making it ‘their own’, which may be more enjoyable, but mostly better suited to the specific skills and attitudes of the group of players.

And this is where the parallels with my professional research in the field of visual effects and filmmaking start to emerge. I propose that by inviting the individual creativity and craftmanship of the teammembers and making this central to the design process, this will lead to new ideas that will also be better suited to the skills and qualities of the teammembers.

This leads to the following question:
“What role can I play to stimulate this creative process, and what are the possible threats or stimulating factors to take into account?”.

This I wanted to test on the rugby pitch.

The approach I took was to create a realistic game situation, and invite the players to design a gameplan to execute together in response to it. I used the Hidden Design Intervention Card to prepare. 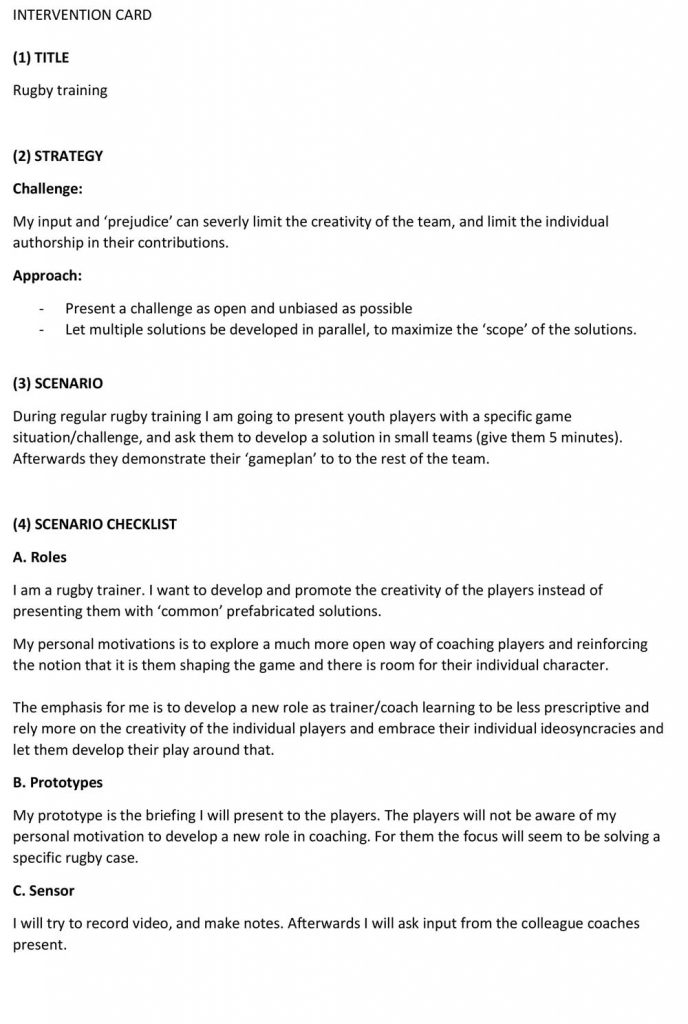 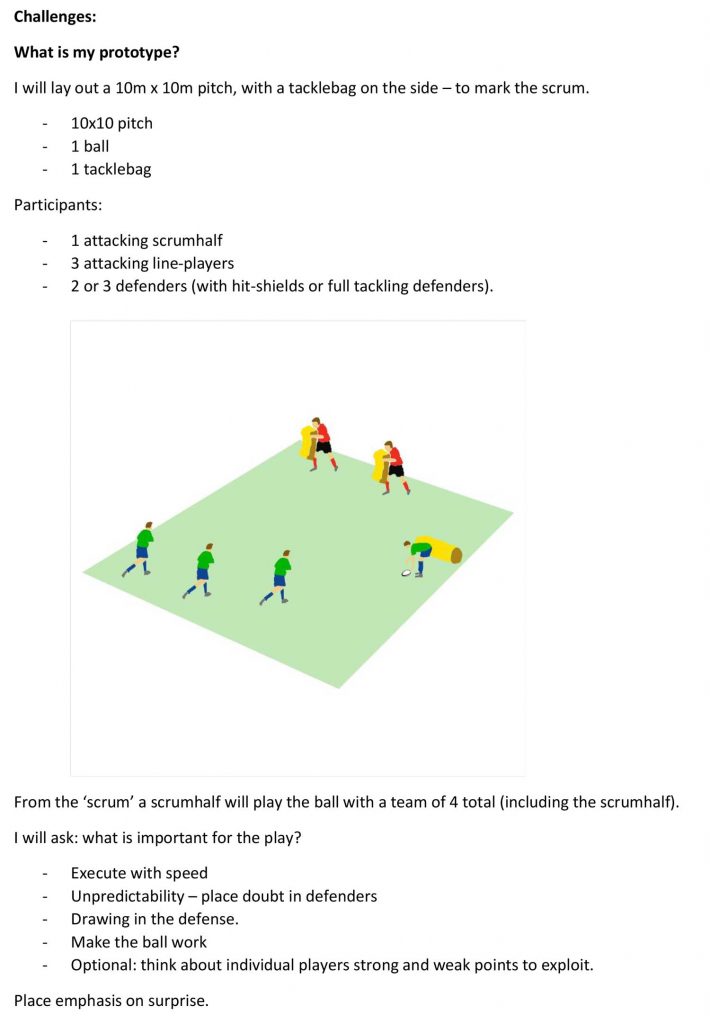 Players were a bit confused by the invitation to think of a plan. They were clearly expecting the coach (me) to explain what I would like them to do. The team had just started training together this week so some were still getting to know eachother. In this agegroup with players from group 8 up to 2nd grade high school the players were very self-conscious.

The general approach of the players was not very playful, not a lot of adventure.

PIVOT
I simplified the explanation to the bare bones, expecting the younger age group that followed to be even less responsive.

This age group was really positively excited about the freedom to play. They had no inhibitions whatsoever and after an attempt ‘failed’ they were really keen to try it out again, or come up with a new idea. They kept wanting to do new experiments and were sorry to see the session  come to an end and have ‘regular training’ continue.

This group was a little distracted by the camera.

OBSERVATION: if I want more ‘productive’ or ‘effective’ useable results, then I need to be a bit more specific and give a little more direction. This is paradoxical to my original statement.

The available time is brief for getting actual results with groups that are not used to being asked for creativity. The solutions were not very imaginative. The atmosphere felt ‘not safe’. After talking to their coach he confirms that the age group of 12-13 is very difficult in terms of self-consciousness and risk-taking is a complex issue.

In hindsight not surprisingly the 8-9 year old group was a lot more spontaneous in their responses and really enjoyed the chance of fooling around.

What would I like to get out of the next iteration?

In the third session there was a slightly different dynamic, partly because the age group sat right in between the previous two groups, and I had already been training them in the previous season so they accepted me as their coach very easily.

The players were eager and excited about trying things out, and were rehearsing (I did suggest they could)
In terms of useful results some ideas were actually good.
There was a very open exchange, I did not notice any inhibition.

Conclusions:
When stimulating creative interaction within a group, the emotional safety within group is a huge factor. This is also affected by age.
The relationship with (credibility of?) of the coach within the group is a factor in the teams willingness to take risks.
There is a fragile balance between too little and too much input: too little direction can leave the teammembers uninspired, or results may be totally irrelevant to the goal.
If teammembers are not used to be called on their creativity in a specific context it will take time to get them to ‘play’.

Useful lessons
As small and futile as an experiment may seem, they can sometimes lead to substantial insights.
There are many more parallels between coaching rugby, teaching animation and coaching creative teams than I was really aware of.
Trust and emotional safety are essential for creative interaction.
Too little information can actually be counterproductive when trying to stimulate creative experimentation. Some fuel needs to be provided to allow it to spark.

My full presentation that I did in the end of the week can be downloaded here.